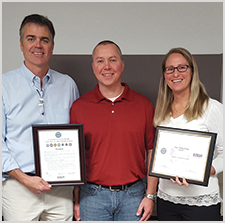 La Crosse, Wis. – Amy Jungerberg, Pre-Press Production Manager at Inland, has been nominated and selected as a Service Member Patriot Award recipient. Jungerberg was nominated by her employee Todd Phillips, a current serving member of the Army Reserves.

Individual supervisors and bosses are nominated for the Patriot Award by an employee serving in the National Guard or Reserve for support provided directly to the nominating Service member and his or her family. The Patriot Award reflects the efforts made to support citizen servicemen and women through a wide-range of measures including flexible schedules, time off prior to and after deployment, caring for families, and granting leaves of absence if needed.

“I nominated Amy Jungerberg for the Patriot Award because of her flexibility as a boss in allowing me to continue to take the time off needed to fulfill my obligations in the Army Reserves” shared Phillips. “I felt this award was a reflection of her character and of Inland’s as a whole.”

The award was presented from the Department of Defense to Jungerberg by Mr. Walter Haag, the Chairman of Area 5 of the Employer Support of the Guard and Reserve (ESGR) and Mr. Gerald Meyer, a U.S. Army Reserve Ambassador. In addition to the presentation, Mark Glendenning, CEO & Owner of Inland, also signed the State of Support for the Guard and Reserve – a declaration of employer support for employee(s) participation in the military.

For more information on ESGR and the Patriot Award, visit www.esgr.mil.