Home / Blog / Helping out on Hops for Heroes 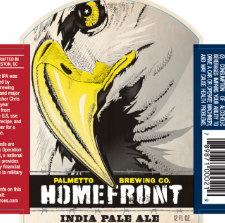 Helping out on Hops for Heroes

It’s that time of the year again! The sun has started shinning a little brighter and we begin welcoming the summer months – all on the brink of a joyous Memorial Day. It’s a time for reflection, commemoration… and maybe even the perfect time for an ice-cold beer.

This Memorial Day many people are doing just that and taking part in Hops for Heroes. This 2014 collaborative project was brought on by eleven breweries and various suppliers in order to brew, package and market Homefront IPA.

But what’s the best part about all of this? It’s not the thirst-quenching IPA beer or the fact that it’s aged on Louisville Slugger maple bats (although that’s pretty awesome too 😉 ). It’s that 100% of proceeds from Hops for Heroes is donated to Operation Homefront, a national group that provides emergency financial assistance to military families.

Hops for Heroes was able to raise roughly $80,000 dollars for Operation Homefront in 2013. This year, Hops for Heroes is hoping to top $200,000 and is set to brew 800 barrels (24,800 gallons) of beer between the 11 participating breweries. The beers made their debuts this week, just in time for your three day weekend.

Here at Inland we were fortunate enough to take part in this project by donating labels to a few of these breweries, including Saint Arnold Brewing Company of Texas and Palmetto Brewing in South Carolina. But their tasty brews (and fine-looking labels) will only be available while supplies last…

So what are you waiting for? Load up your cooler full of Homefront IPA this Memorial Day weekend in honor of those who have served our country. For a complete list of participating breweries and sponsors, visit www.hopsforheroes.com.