Home / Blog / Inland Celebrates 75 Years: Our Past, Our Present, and Our Future – Part 2 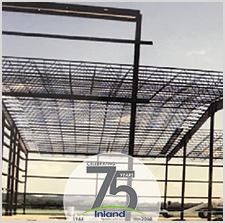 Inland Celebrates 75 Years: Our Past, Our Present, and Our Future – Part 2

This month we celebrate 75 years of Inland being in the Glendenning family.  We are taking a walk down memory lane this month sharing fun memories and old photos (there are some doozies!) with our employees and Inland community.

Earlier this year, we shared where Inland’s story began, during the John Era.   Mark’s grandfather, John, bought the company and moved his family to the Midwest to run Inland Printing.  John’s son, Jack, joined the company business shortly after the move in 1960.  It started out as a small commercial print shop, expanding into the label business in the 1970s.  Inland took advantage of our location in La Crosse WI, to connect with a local brewery, G. Heilman Brewing Company.  This would be the first of many craft beer customers.

Jack held various roles within the company and took over as CEO in 1974.  John had established a mission built upon customer delight, and Jack saw the potential for growth in Inland’s future.  He had a vision — growth for our employees, growth for our customers, and growth for our communities.  Customer satisfaction was (and is) a key to Inland’s success, and Jack wanted to grow this company beyond a local commercial print shop.

G. Heilman Brewing was Inland’s stepping stone into the beer industry, but we quickly grew to be the premier label supplier for the big beer brands as well. Working with major beer companies like Miller required improved equipment, processes (such as a quality management system), and a larger facility to support the growth. Throughout the Jack era, Inland invested in 5 new pieces of equipment, a combination of offset and gravure presses. In 1992, Inland broke ground on a third facility in La Crosse that was approximately 40,000 square foot in size.  This facility is now known as our current Airport Road facility. Three short years later in 1995, Inland needed to expand this location with an additional 20,000 square feet to hold two additional offset presses.  If you can believe it, we didn’t stop there. Inland was thriving and growing in the beer industry, and expanding into the food, water, and beverage market.  This required Inland to invest in an additional 30,000 square feet, to bring us to a grand total of 90,000 square feet.  The way in which our Airport Road facility evolved in eight short years exemplifies that the Jack Era truly was all about growth.  Growth for Inland, growth for our employees, growth for our customers, and growth for our community.  Inland first hit $1,000,000 in annual sales in 1974, and 10 or so years later Inland hit $10,000,000 and we haven’t stopped growing since!  Jack’s son, Mark, joined the company as a Sales Representative based in Chicago, IL in 1988.

Be sure to report back, our last 75th-anniversary blog will hit on the Mark Glendenning Era // 1988 – present and looking to the future.

As we’ve reflected upon the good, the bad (and the funny) memories of the last 75 years, it is clear that the Glendenning family has established an amazing company that our employees are proud to work for and our customers are proud to work with.  It’s been a great 75 years so far, but don’t go anywhere, we are just getting started!