Home / Blog / Inland Celebrates 75 Years: Our Past, Our Present and Our Future 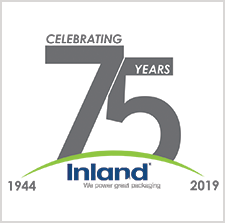 Inland Celebrates 75 Years: Our Past, Our Present and Our Future

We are thrilled to share that Inland is celebrating 75 years of business this year!  I know, doesn’t it feel like just yesterday when we were celebrating our 70th Anniversary?  We’re excited to spend the year reflecting back on the Inland story and celebrating how we’ve evolved from a small print shop to a global packaging supplier.

Our Past – When the Inland Story Began

The Inland Printing Company story began in 1907 when our primary business consisted of printing garage forms for the local Ford automotive dealers.   Around 1938, Inland Printing expanded their focus past printing garage forms to a more inclusive small job print shop.  At this time the primary print technology used was letter press.  In 1944, John Glendenning moved his family from Detroit, MI and partnered with two gentleman to purchase what was then known as the Inland Group.

John became sole owner and President of Inland Printing Company in 1952.  Inland’s business began to flourish as they gained more local customers printing forms, posters and other items.on a Davidson 10×14 offset press.  John’s son, Jack, had joined the workforce and was tasked with many miscellaneous jobs at the plant, like most kids growing up in a small family business did.

Throughout the 60’s, there were three different offset presses added to the La Crosse facility as well as a multi-binder to support the commercial business.  As more equipment was purchased and the business continued to grow, John quickly realized that Inland was growing out of the  downtown La Crosse space.  In 1971, Inland Printing Company relocated to our current West Avenue location.  This is now our company headquarters.   The new West Avenue location was better suited for manufacturing as well as the growth Inland was striving for.  Shortly after the move Inland partnered with a local company, G. Heileman Brewing Company, this would be the start of Inland’s presence in the beer market.  In 1973, John Glendenning retired and Jack became Chief Executive Officer.

Our Present – Where We Are Today

It has been a short, yet eventful 5 years since we celebrated our 70th anniversary, and you may think that there wouldn’t be much that has changed in a half a decade.  Boy, are you mistaken!  Since our last anniversary celebration, we’ve rebranded, acquired a pressure sensitive facility and a shrink and flexible packaging facility, purchased two additional Heidelberg presses to support our cut and stack business, invested in four new flexographic presses, and let’s not forget the addition of our digital press!

Our Future – What is to come?

We began as Inland Printing, a small commercial print shop, and have grown into a global packaging supplier.  Our success is because of each and every one of you –   Our communities.  Our customers. Our employees. Our supporters.  The last 75 years have been quite a ride.  We can’t wait to see what’s in store for the future, with each of you by our side.